A few years ago, the Schwarz wrote about a three-legged stool and he also provided the plans for it (he may have called it the "staked high stool").  I always thought it looked sharp, and I had saved the plans for "someday".  That day finally got here.

It started with gluing up pieces of red alder for the legs and stretchers.  For the seat, I used a piece of a glue-lam table top that someone was giving away.  All recycled wood, as usual.

The legs were straight for the top 3-4", then tapered the rest of their length.  The straight section needed to be shaped into a round taper to fit into the round tapered mortises that will be in the seat.  And the design of the leg was such that I couldn't use a tapered tenon cutter, at least not easily.  So I bored and tapered a hole in some scrap, and put pencil marks all over the inside of the hole.  After giving the top of the leg a rough taper with a drawknife, I inserted the leg in the hole, pulled it out and saw where material needed to be removed.  Several iterations got the taper just right.

The holes in the seat were bored with a brace and bit, then tapered with the tapered reamer, using sliding bevel and square to verify the proper angle.

Boring holes in the legs was fairly straightforward.  In the next picture, notice the yellow rubber band on the benchtop.  It was wrapped around the two front legs at the marked height of the stretcher and a sliding bevel was used to get the proper angle to bore the holes for the front stretcher: stock of the bevel on the leg, blade along the rubber band.

To form the stretchers' straight cylindrical tenons I sawed shoulders and cheeks, then rounded what was left using a small rasp.  The fit was tested in a scrap piece before committing to the real thing.

I did some things differently from the plans.  One big deviation was the shaping of the seat - his is just flat on top and I wanted to saddle this one.  So I marked out a shape and drilled some holes as depth guides.  It went from 5/8" deep near the back to 3/8" at the front.  In retrospect, I might have gone a little deeper.

I mainly used a small curved-sole plane and a shoe lath shave to carve out the seat.  This was a LOT of work!!  Man, I've got to get a scorp.  Or maybe a bowl adze or similar tool.  The plane was a Sellers design and was the first plane I ever made, probably about 8 years ago.  But I don't think I ever hardened and tempered the O-1 steel iron.  While using it on this stool seat, it dulled quickly.  So I got out my torches and canola oil and hardened and tempered it.  What a difference that made!  The cutting edge lasted SO MUCH LONGER!

Anyway, back to the shoe lath shave.  That thing worked GREAT!  And it was really fun to use.  It didn't take very thick shavings, but it cut nicely and held its edge well.  Can't wait to use it again.  Curtis Buchanan cut off the handles on his so it could get into more tightly radiused areas.  I'd hate to cut the handles off mine - maybe if I had another one I wouldn't feel too bad about it.

After finishing the seat with scrapers and some sandpaper, a dry-fit was done and it was on to glue-up.

Another difference from the plan was the angle of the seat - mine angles back about 4°, a few degrees less than the plan.
And here she is was a few coats of shellac.  There are a few things I would change if I was to make another.  First, I have a skinny ass and the saddled seat is wider than I need.  Also, the seat itself could be narrower, and maybe an inch or two deeper.  Fun build, though.  And it's pretty comfortable to sit in, especially with my feet up on the front stretcher.
Posted by Tiny Shop Woodworks at 3:47 PM 5 comments:

OK, so square patterns were challenging, but not too bad.  Moving on to patterns based on 60° joints is a whole other ball game.  At times it reminded me of how tough it was when learning how to make wooden screws.  But just like that time, things come with patience and work.

In this post, I'll share how I went about making the frame.  Fitting in the "loose" pieces (those fill-in pieces that aren't joined using 60° lap joints) is basically the same as for square-based kumiko, only we use a jig for trimming 30° and 60° angles.

My first woefully inadequate attempt started with a jig similar to that for making the square frames, but with a 60° angle.  That jig has since been destroyed, but it was like this sketchup drawing.

It's a piece of wood as a base, a 1/2" x 3/4" stick glued to it with a couple of kerfs cut at 60°, and a stop block.  This was sufficient to get started.  With the help of a spacer block, I could cut two kerfs in a workpiece to create a half-lap cut-out, into which another workpiece would fit.

With this jig I was able to get a few sticks lap-joined.  But there was a problem ...

I was hoping that I could use this slanted grid with some fill-in pieces to get a hexagonal structure.  But doing it this way, the grid was flimsy and would not hold the proper shape.  I realized that this was not the way to go, so I did some more research.  People make hex kumiko with 3-way joints.  And there is more than one way to get that joint.  I settled on one that I saw in this kumiko video.  This is an excellent tutorial for doing hex kumiko with hand tools.

I ended up doing things a bit differently from the author of that video, but it worked - after several failed attempts.  First I did a larger mock-up.  Working on 1/2" x 1/8" kumiko sticks is challenging, so I started with some 3/4" x 1/4" sticks - MUCH LARGER in comparison.  Here's what the three sticks need to look like:

Like I mentioned, it's tougher to make these joints in smaller stock.  The video's author used a cutting jig similar to what I showed above, but he also measured distances and used a marking knife to mark where the cuts would start.  I wanted a cutting jig that would eliminate the need for measuring and using a knife.  Eventually it was successful, but not without a few failures ... 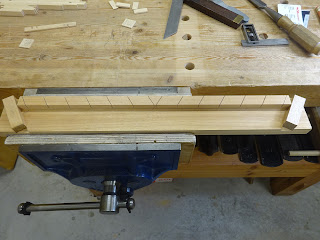 In the first attempt, I spaced the kerfs by cutting the outer-most ones a measured distance from the stop blocks, then each successive kerf was marked using a block marked with a knife line as shown below.

When using the jig to cut kumiko workpieces, I needed something to limit the depth of the cuts.  I used two pieces of wood, each planed to about 1/3 the width of a kumiko piece, and used them to limit the saw cut into my kumiko pieces.  For the "A" pieces, the cuts needed to be 1/3 down, so I used two of these "depth gauges".  After the first cuts are made, the A pieces are turned upside down, butted up against the right stop block again and laps made on the other edge.

The "B" pieces have 60° cuts made 2/3rds down, then they are flipped end-for end and butted up against the left stop block.  The kerfs that had just been cut remain facing up.

After cutting those, removing the waste and test fitting, I found that my jig was not nearly as accurate as I had hoped.  Some of the joints fit OK, but at some point I messed up with one of the kerfs in the jig and some joints didn't have a chance.

I remade the jig and tried to space the kerfs more accurately, as well as trying a different method to get the first kerf at each end the exact same distance from their respective stop blocks.  First I tried using gauge blocks, but this didn't help and I ran into similar problems.

After scrapping another jig, here is what worked.  I butted a ruler up against the stop block and used a knife to nick the jig's first kerf location.

After marking lines as far as the lateral center of the jig, I chiseled a trench on the stop-block-side of the knife lines.

This little cutting "helper" was KEY.  I planed its sides exactly 60 degrees to its back edge and it's sides were precisely square to the bottom.  A small piece of wood is glued to its back edge to act as a fence.  You can see in the above pics how the helper is used to saw perfectly vertical kerfs that are exactly to the right of the knife lines.

I then repeated the same procedure for the left side of the jig, with the 60° cuts going the other direction.  Here's the jig in action.

The last picture above shows nicely centered points on these B pieces.  Assembling the pieces was exhilarating.  They fit together a bit tight.  Individual pieces fit together perfectly, but when multiple pieces were assembled it was a little tough going.

To make the fit a bit easier, I changed the spacer block used to create the lap joints from 0.112" thick to 0.117" thick.  Fortunately the whole jig didn't need to be remade to do this - just changing the spacer block was enough.  And it worked great.  Just a few thousandths of an inch allowed the joints to fit together more easily.

So, what will I do with these square-based and hexagon-based kumiko pieces?  No plans just yet.  Some can be used as wall art or as trivets for hot pans or dishes on the dinner table.  Small patterns could be use as coasters or even ornaments.  I am planning to make a new small cabinet for the bathroom that could have kumiko in the door panel.  Lots of possibilities.

One thing is a bit more certain though.  I might not do more kumiko until I have room for (and purchase) a bandsaw.  Making the strips is a chore.

Posted by Tiny Shop Woodworks at 2:27 PM No comments:

Tiny Shop Woodworks
I've been woodworking as a hobby since about 2006, and almost entirely with hand tools since 2013. The change happened when I moved and my shop was seriously downsized and all power tools went into storage. That was the impetus to get into hand tools, which was a good thing - it has opened my eyes to old time woodworking (though I still wish for a bigger shop).