By the rules of our HOA, we have to keep plants off the surface of a balcony.  My wife has been working in the room just inside our front balcony and wanted something nicer to look at.  So she asked me to make a low stand for some plants that she'll be putting out there.

This post will include some pics of the joinery used to make the stand.  As usual, I made this with joinery that was far more than needed.  She would have been happy with pieces of wood screwed together, but where's the fun in that.  I use just about any piece I build to practice the skills.

The plant stand is basically four legs and four aprons, with five shelf boards running the length.  However, the shelf pieces were almost four feet long and 3/4" square in cross section, so they needed some support in the middle.  I made two more legs, with a rail between them that had five notches to fit the shelf pieces.

This project was finished with a coat of BLO thinned with turpentine and that brought out a nice color in the reclaimed oak that I used.

Now it's on to another honey-do: a couple of shoe shelves.

Posted by Tiny Shop Woodworks at 8:40 AM 4 comments:

Following some suggestions on the previous blog entry from Sylvain and Paul, I worked on the shape of the cutter.  But first, I changed the angle on the front end and played with some other things.

After moving the cutter back 1/8" (by cutting that amount off the back end), I actually got it to cut a little bit.

So I angled the mortise in which the cutter resides and got some hope.

I made a few more similar adjustments, and I was cutting a bit more, but really it was not close to what it should be.

At this point, I set it aside for a few days.  When I went back, I used the suggestions from Sylvain and Paul to shape the underside of the cutter differently.  And I started looking at some angle questions.

I got to thinking about how a cutting angle changes depending on where on a circle a cutter is positioned.  In the following two photos I'm holding the cutter on the screw that I had cut with a chisel a few weeks ago.  The leading edge of the cutter is at the "top" (defined by the picture below) of the circle and it is perpendicular to the radius of the circle where the leading edge contacts it. 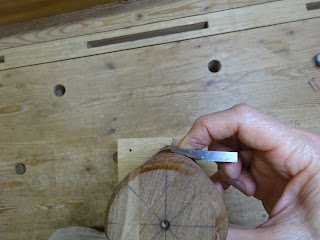 But if I move the leading edge of the cutter away from the "top" and angle it down a bit, like I did for the screw box, the angle of presentation of the cutter changes and I'm no longer cutting threads where the facets of each thread are at 90° to each other.

For this reason, I moved the cutter back to its original position: cutter up closer to the "top" of the circle and perpendicular to the radius at that contact point.  After that, I checked the position of the cutter with respect to the screw that I cut with a chisel (and I know fits in the screw box).

With the relief that I had ground on the underside bevels of the cutter, as well as the adjustments noted above, I cut a bit of thread.

I made a couple more adjustments to the depth of cut by shimming the cutter to angle it down slightly and tried again.  This time I'm using a poplar blank that had been soaking in mineral oil for a week.  BTW, the cherry blank used in previous work had also been soaked in oil.

When I cut the thread in the picture, I could no longer turn the blank into the screw box.  I think it's because I'm still not cutting deeply enough, so the "valley" of the thread is getting caught on the peaks of the internal threads in the box.

At this point I decided I had to put this aside for a while so I could get to some other projects.  But I'm getting closer.  When I get back to it, I'll work on some smaller screws.  Perhaps 2 1/8" OD was too big for a first attempt.

Making the screw box has been an exercise in frustration.  At the end of the last post, I had threaded the hole in the rear block and was trying to make a cutter from a too-small piece of steel.  I ended up buying a short length of 1/2" x 1/4" O-1 steel and was able to make the cutter from that.

With the first attempt at a cutter, the interior and exterior facets extended back 1" from the front edge.  This time they only go back 1/2".  I think this will help in two ways.  First, there will be a greater angle at the cutting edge, which will strengthen the edge.  Second, the escapement is supposed to cover the entire inside "V" shape and having that shape go back 1" would make the escapement larger than I'd want.

The new cutter was shaped with hacksaw and files.  Later it was honed with a triangular stone and a strop.  It's a whole different thing trying to sharpen a V-cutter.  So far, I'm not satisfied with the overall cutting edge I'm getting.

With this new cutter, I had to deepen the mortise in which it will reside.  I made it deep enough so that the bottom of the "V" was in line with the peak of an inside thread in the rear block.  In the picture below, I still need to make the mortise a little deeper.

The workpiece to be threaded has diameter of 2 1/8" and this block started out with 1 3/4" inner diameter.  You have to cut away the first thread or two to allow the workpiece to get to the cutter.

But when I insert the piece to be threaded, it doesn't contact the cutting edge!Per Sir Roy's book, I was aiming to have the leading edge of the cutter roughly lined up with the centerline of the block.  It seemed like I needed to move it to the right to get the workpiece to contact the cutting edge.  In the pic above, I've already shortened the cutter by 1/8", moving it to the right by that amount.  And I'm still contacting the cutter's bevel.  It looks like I'll need to move it back more, but then, due to the curvature of the hole, I'll need to move it down a bit to allow it to cut a full thread.If there is any reader out there who can shed some light on proper positioning here, please leave a comment.  I could use some help on this.
Posted by Tiny Shop Woodworks at 8:05 PM 17 comments:

Tiny Shop Woodworks
I've been woodworking as a hobby since about 2006, and almost entirely with hand tools since 2013. The change happened when I moved and my shop was seriously downsized and all power tools went into storage. That was the impetus to get into hand tools, which was a good thing - it has opened my eyes to old time woodworking (though I still wish for a bigger shop).